“I guess it comes down to a simple choice really – get busy living or get busy dying.” 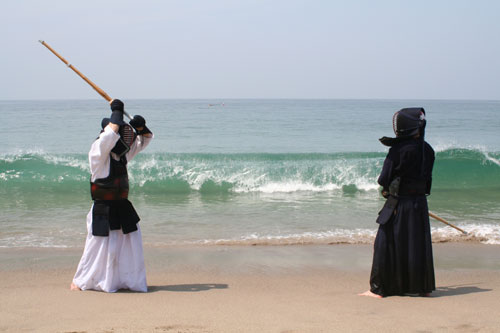 I had a student come to me and ask for a private lesson to show him how to execute a jump spin kick. Of course I feel that it’s long overdue and he should have asked me many months ago when he was first introduced to it as a Tae Soo Do (TSD) Brown Belt. Nearing his TSD Black Belt graduation where he must complete the final part of his Black Belt Testing Requirements by successfully breaking five boards with kick combinations, finishing with a jump spin/low spin kick break, he felt the need to get some extra help to ensure his success. It’s a good thing he was proactive in trying to control the future outcome by increasing his preparation, but what really motivated him? We’ll come back to this. As we continued his private session, he was having a terrible time fixing his old habits. Finally I blurted, “What are you afraid of, what?!”

He answered, “I am afraid of falling.”

I replied, “You have been here almost three years, learned how to fall properly, are standing on two inch thick mats, and yet you are still afraid of falling? Well, that’s it then. You must become unafraid and accept the worst outcome before you can move forward or perish (not in so many words).”

Human beings are motivated strongly by fears; mainly fear of injury, pain, hardship, embarrassment, and of the unknown. We try to balance our fears by creating comfort zones of predictable patterns to limit our uncertainty, deluding ourselves to think that we have some grasp on our lives. As we are taught in Hwa Rang Do to never retreat in the face of the enemy, we must first clearly define and understand this enemy of ours – fear. Let’s think for a moment what that is. Fear is anticipation of negative results from a particular event, action, or set of conditions that has been learned from past similar events. The important thing to understand is that fear is not real. It is imaginary. It did not happen, and might never happen; it’s only our imagination, our mind which creates images with emotional and psychological attachments that become so real that we create our lives, our responses, and our choices based on fear – our imagination.

There are two types of fear discussed here: let’s describe them as good fear and bad fear. Good fear causes motivation for action and bad fear creates reasons for inaction. Good fear prompts proactive behavior while bad fear immobilizes our minds, causing either no response or complete abandonment – quitting. The good fear prompted the student to take action to prevent the negative result that he was anticipating with planning and preparation by deciding to take a private lesson. The bad fear prevented him from creating the necessary changes for betterment and advancing. He took refuge (as many do) in the comfort of what’s most familiar. Whether that’s good or bad, negative or positive, self destructive or self enriching has no bearing on the decision. Just as a hermit crab hides in their shell, so do we hide in what’s most familiar. The student was not willing to give up what’s familiar and clung to it like a safety blanket (however old, filthy, or smelly it may be), fixating only on the potential negative result rather than focusing on the possibility for growth and change for the better.

Once I helped the student think through the worst that can happen to him – a broken leg, perhaps, maybe even death (highly unlikely but let’s give our imagination the benefit of the doubt) the student was willing to move into unknown territory. Where before he kept doing the same wrong movement, once he accepted the worst-case scenario, he began to try different ways. Finally after almost an hour of what was to be a thirty-minute session, he made some progress. However, something very interesting occurred. He made some advancement, but quickly regressed to his old ways when he felt he was losing control, uncomfortable with the new body positioning. I think he even fell once. Well, that confirmed it. His fears were right – he did fall. Fear is not logical, it’s not just mental or emotional, it’s all consuming, and it’s powerful. Fear cannot be underestimated, and the demon that has taken a lifetime to take root and grow cannot be defeated in a single brief encounter.

Furthermore, fear cannot be eliminated and should not be. Everything serves a purpose and so does fear. However, like all things, we must learn to control it, using it as fuel for action and exercising caution in making decisions. Being able to do this requires strength, which in turn increases our self-confidence, and enhances our self-image. These are all necessary weapons when facing the demon of fear.

Primarily, we need the strength to accept the worst-case scenario. If one cannot, then they must quit their task and hide from fear, as many people try to hide from death. The problem is that death will come and we have absolutely no control over when or how. The only thing we have control over is life. Hiding is only a temporary solution. Also, have you noticed that when we quit things, or give up on dreams, that in our minds it’s perfectly justified and we have all the right reasons to do so? Of course we do! How could we live with ourselves if it weren’t the case? This is how our mind works for self-preservation. Letting go of these justifications and delusions by being true and honest to oneself is the first step in battling our fears. As warriors then, by definition, we must train ourselves to be unafraid of confrontation and engage our enemy. We must accept and embrace death as a guest, a friend that walks next to you with life on the other side. Only by embracing death, by truly understanding it, can we begin to appreciate and respect life. Not to abuse our life and live recklessly, which would be disrespecting death, but by honoring life so that our deaths become more meaningful.

This is the beauty and the power of Hwa Rang Do. We exercise dealing with fear on a daily basis as we take on physical, mental, and emotional challenges set by the art, fellow students, and me in a controlled safe environment. Hence, realizing our limitations, weaknesses, and the truth about ourselves, we can practice taming our personal demons and making them our friends that we may call upon for help – sources of motivation. As the protagonist, Andy, in the acclaimed film, “The Shawshank Redemption,” was forced to make a decision when all hope was lost, so do we – either to get busy living or get busy dying. After losing all hope, when facts were revealed that could prove Andy’s innocence were brutally suppressed by the prison warden, Andy was forced to contemplate the meaning of life. Hopefully, we do not need to be in such extreme conditions to realize that the choice is ours – to live or to die, to be living or to be dying.

Death is inevitable and tomorrow may never come. To live life by allowing fear to force our hopes and dreams into hiding, never realizing our full potential, is slavery epitomized. We must look deep within and bring to the surface our innermost fears, confronting them face to face as we do our opponents, sparring until imminent victory. The fear you suppress most that lurks in the dark crevices of your mind is what enslaves you and it’s that enemy that we must overcome in order to truly live life with freedom. I hope to continue gettin’ busy living with all of you for many more years to come.

With gratitude to death in making our lives more fulfilling,

Wow! Brilliantly written! Grandmaster Lee, you’re right! We all have these secret fears that hinder us from fully living life. I chalk this speech as another one of your specials that wake me up to look at myself in the mirror in order to find whats holding me back. It’s definitely time to embrace that fear and live life to the fullest.

When we aren’t confident, it motivates us to be strong with dignity integrity and honor and builds us up in true strength